After grafting one seedling pecan tree last May the buds on the scion were very slow to pop and then they only grew about two or three inches during the season.  Normally, the expected growth with this size seedling stock tree would be one to three feet.  When I took a closer look at the graft union this Spring, I could guess what happened.  The graft method was a three-flap – or banana graft – so named because after the seedling stock tree is cut off, three flaps of bark are pulled down about three inches and the inner core is cut out.  Then the scion is carved so that three faces of exposed inner wood slightly shorter than the three flaps of the stock are separated by narrow strips of bark.   This carved scion is inserted into the three flaps of the stock with the flaps completely covering the faces of the scion wood and the combined graft wrapped up tightly.

As you can see in the next three pictures below only one of the three flaps on the seedling stock tree mended together with the scion.  Despite the flubbed graft the scion did manage to survive. 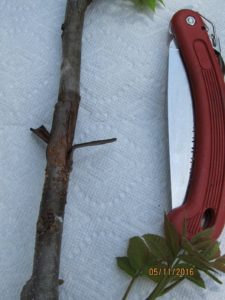 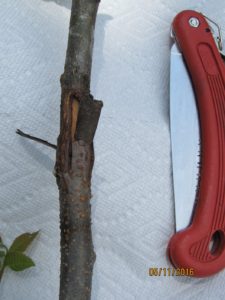 In May of this year I decided to cut off last years graft and graft the seedling tree again.  If my grafting skills have improved, maybe the tree will grow better this year – hopefully it will grow out one foot or more before Fall.

And, of course, there are more bloomin’ flowers to show. 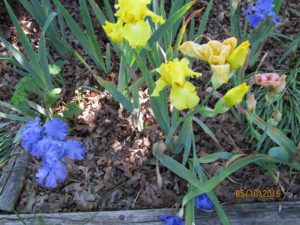 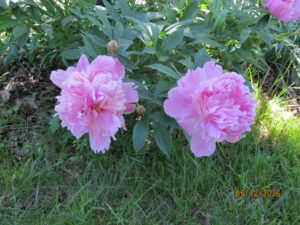 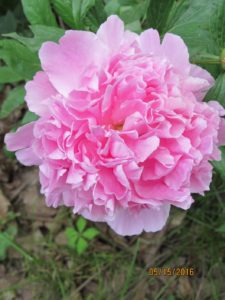 Last October I collected some Chinese chestnuts from the Chestnut Charlie Orchard in Lawrence. After placing them in plastic bags with enough moist moss to cover them I stored them in the refrigerator at a temperature of about 35 degrees F.  A note about the plastic bags: I poke a few tiny air holes near the top of the plastic bag after enclosing the nuts. One year I double bagged the nuts before placing them in the refrigerator, and, when I opened up the bags in April there was a strong aroma of alcohol and the nuts had spoiled.

In February the nuts started sprouting. By mid April most of the nuts had a single small white root growing out of them. I then placed each sprouted seed nut in a one gallon plastic pot and put the pot in a wire cage box to keep away the mice and squirrels. Although it would have been better to put them in pots earlier, they should still produce small trees this summer. The following two pictures show the box with the pots inside. 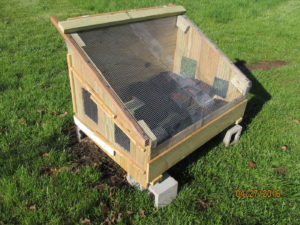 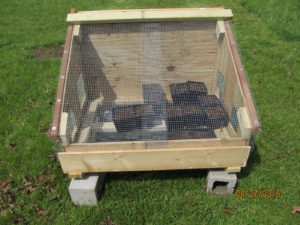 The following two pictures show a pretty flower that has popped up in road side ditches during the last couple of weeks. I need to do some research to figure out what it is. 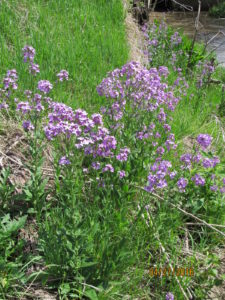 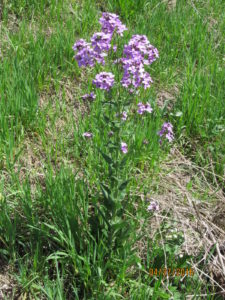