All the normal maintenance tasks listed in the 2015 year in review posting continued through this year. Again this year I sprouted some some pecan seed nuts and Chinese chestnut seed nuts and grew them in pots.  In November I transferred the potted trees to a straw bale fort and covered them with mulch to protect them during the cold winter months.

During October and November I planted 54 more trees from pots into the fields as follows:

Over the next few years I need to decide what vegetation under the trees will facilitate harvesting. Also, I hope to get rid of the fescue grass that robs the soil of moisture.

These last four years have gone by quite fast. But, I am still in the beginning stages of establishing a nut tree farm. There remains lots of work and lots of learning for future years.

I sowed about one acre of Daikon radish in August this past Fall as a test. The literature reports that Daikon radish grows roots down to three or more feet. And, when the the roots die they leave behind pathways for air and water to percolate down to the root zone.

Here is a picture of a radish a few days after the temperature dipped below zero on a couple of days. The low temperature has killed the green leaves and froze the watery root/bulb that is above ground. 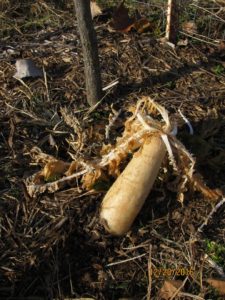 The above radish is protected by a fence ring that surrounds a tree. Although the deer and other creatures chomped down on many of the radish bulbs outside the  fence rings, they did leave a few behind as in this picture. 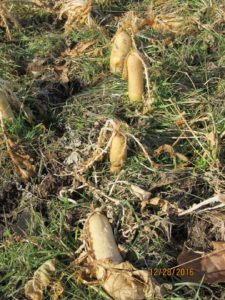 So, for the next few weeks or longer the aroma of rotting radish will pervade that one field.

And, here is a picture of my first attempt at making a Swedish candle. 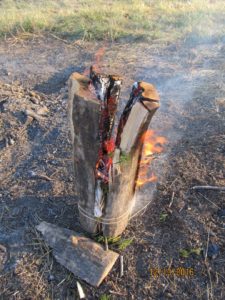