Harvest of my first ever crop of Chinese chestnuts started about the middle of September and went through the first week of October. The trees were transplanted into the field in October, 2012, from pots. The 19 trees had about 30 burrs total which produced over 60 filled nuts and a number of blank empty nut shells.

Not all trees planted that year had burrs. The count of burrs by variety of tree is: three of three homestead trees had burrs, one of three peach trees, two of three eaton trees, one of three quing trees, and one of six seedling trees. And although the burrs have three nuts each, usually one nut is a flat shell with no nutmeat inside it. The first trees to drop nuts from the burrs were eaton. The homestead and seedling burrs were last to drop their nuts.

In the following picture you can see one burr near the top of the tree that has started to open up. 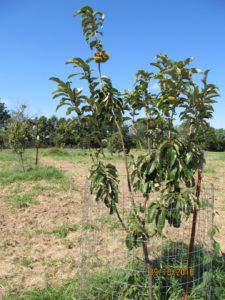 The following picture shows a burr still on the tree that has started to split apart but with the nuts still inside it. 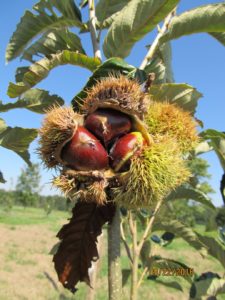 Voilà, some nuts have dropped out of the burrs onto the ground. 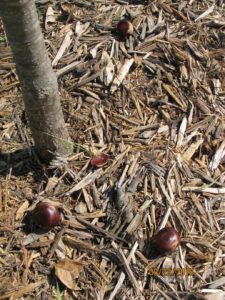 And this picture shows some fully developed nuts on the left and empty blanks to the right. 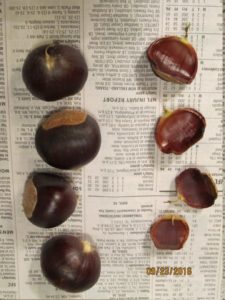 After the nuts drop out the burrs will eventually fall to the ground and turn brown. Note – those needle stickers are very sharp. 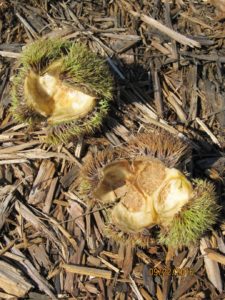 And here is a close up of another burr where the middle and right side nuts filled out but a the left side is an empty blank. 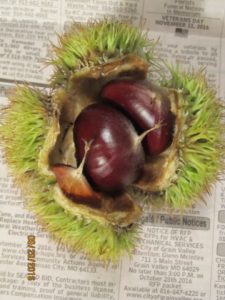 One way to cook the nuts is to bake them in a 350 degree oven for about 20 minutes. BUT, first the brown shell of each nut must be scored with a knife. The nuts will explode like popcorn if not scored. Here are some nuts that have been scored in preparation for baking. 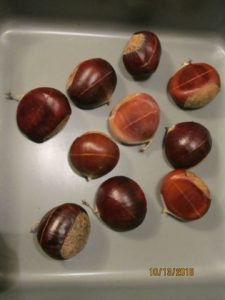 And in the next picture you can see the nuts after baking in the oven. The thin shells have opened up along the score lines and reveal the yellow tinged nutmeat. Each nut has a thin gauze like substance between the shell and the nutmeat. 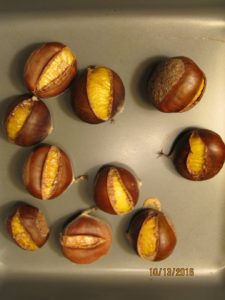 The next picture was taken after a two-legged mouse sampled the product. 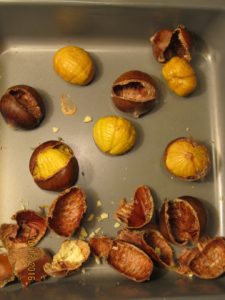 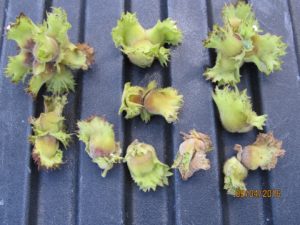