The first buzzard of 2016 was sighted as it soared/floated around on the strong and gusty March winds on March 15. The winds were so strong that it was doing acrobatics and never even flapped its wings.

This past week I cleaned out the bluebird houses installed in previous years – six had nests from last year, one had fallen down, and the entry hole of one had been redesigned by woodpeckers making it inhospitable.

After making two more houses I put them up out in the field by attaching them to t-posts and placing a piece of metal pipe on the post between the ground and the house. The pictures below show one of them. 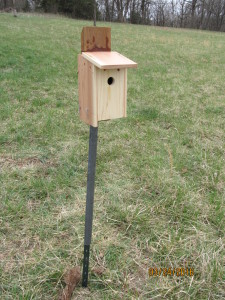 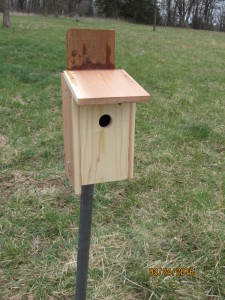 One of these days I hope to put up a martin house and also construct a small shed for barn swallows to build their mud nests in and poop all over any equipment stored inside it.

This is the first year the Nanking Cherry bushes have bloomed. After transplanting two bushes from pots in 2013 one bush has grown quite well but the other plant had some die-back last Summer. But, this Spring both bushes are covered in pretty white blooms. The pictures below illustrate the beauty that Lee Reich describes in his books. 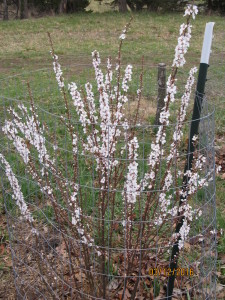 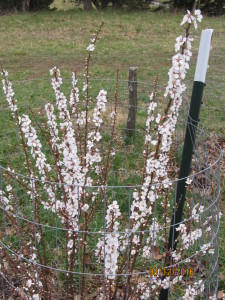 The same bunch of Easter flowers that bloomed weeks before their neighbors last year have bloomed early(March 7) again this year. 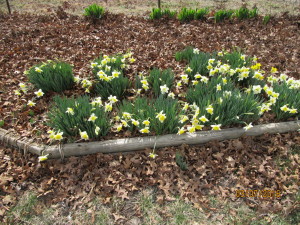 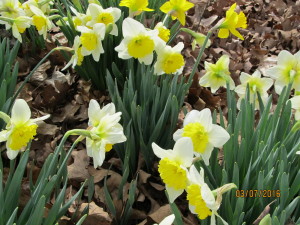 And, the elderberry buds are popping out new leaves. 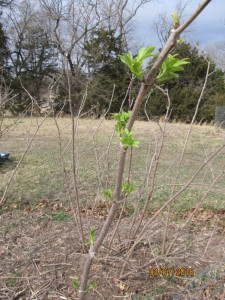