I am lucky that a former owner of the property made a couple of flower beds and enclosed them with small timbers. One bed has early Easter flowers as shown in the first picture. Of the many flowers that grow along the fence outside of the beds, the surprise lilies are storing up energy that will produce blooms in July and August. 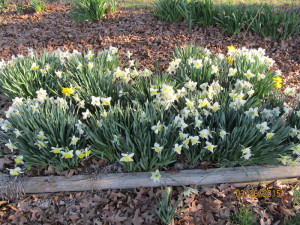 Another feature of the former owners gift is the location of the flower beds – the flowers and flower bed are situated along a fence with oak trees in the fence row. When the leaves drop in the Fall, the wind blows them around so that most of them eventually collect along the fence – see the second picture. As they settle and rot they become free fertilize for the flowers that grow there. When digging in that area the layers of decomposing leaves show natures history for the past couple of years. 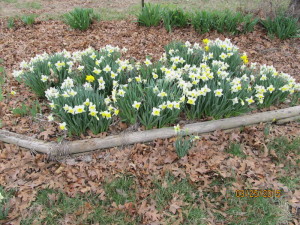 Also, there is a crab apple tree left by a former owner – see the third and fourth pictures. I missed the peak of the red blossoms by a couple of days but the tree is still impressive. Although you cannot see it in the pictures, the grass is full of red blooms from the tree. 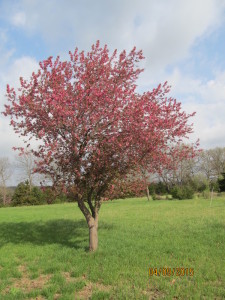 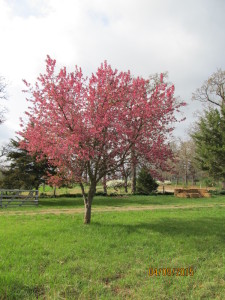 In both 2013 and 2014 the first ticks of the year tasted by blood during the first week of April. They seem to be a little early this year – I saw the first tick on my coat sleeve on March 25.

Although I have tried various methods to discourage the ticks from being so friendly…., they still manage to defy all defensive measures. Perhaps sprays, lotions, and consumption of garlic have some effect, but, as in previous years I expect to find ticks every time I take a shower after being out on the farm from now until late August or early September.

But not all is so droll.  Among the various plants that are waking up in the warmer weather the elderberry bushes are reaching for the sky. They have leaves about and inch long – see the two pictures. Although I am learning how to prune pecan and chestnut trees, I need to read up on pruning elderberry bushes too. 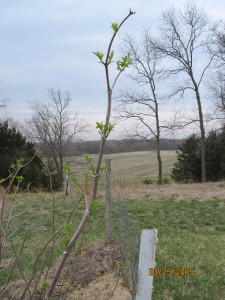 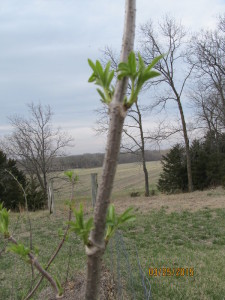 After the cold days of Winter the buzzards(turkey vultures) also appeared last week. They should have a plentiful food supply as the deer, rabbits, and squirrels continue to loose their game of dodge against the automobiles.

When I acquired the property in 2012 there were a number of decrepit bird houses spread around the property. The roofs had fallen in and they had not been occupied for a few years.

After putting up bird houses during the last three years there are now a total of eight new houses on the property that were constructed by humans. In March, 2013, I put up five houses – four that I made myself and one that a neighbour gave me. This year I made three more and put them out in the field. The diameter of the entry holes is either one and a half inches or one and an eighth inches. The larger diameter is sized for blue birds and the smaller is for chickadees and house wrens.  The following four pictures illustrate the different designs used in the construction.

The smallest inside dimensions of the box shaped houses are about four inches by four inches for the floor and about six inches to the ceiling. Note the “natural log” style bird house that consists of a length of hollow tree log with a floor and roof attached to the bottom and top. Would you agree that one style resembles a chalet in the Swiss Alps?

Of the houses I built this year I added a diamond shaped block of wood over the entry hole.  Hopefully, this added thickness around the entry hole will hinder the actions of self-styled carpenter birds.  As you can see in the first picture below the carpenter birds (wood peckers) added their own touch to the structure of one house that was built two years ago.  To make the house liveable again for blue birds I tacked on a new entry door like that shown in the second picture below.  But, almost immediately the carpenter birds did their “home improvement” as shown in the third picture below. 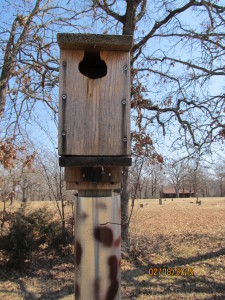 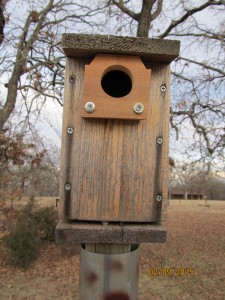 After constructing the houses over the past few years I think two design features should be standard in new house construction. One is to have either a side door or a removable roof to facilitate cleaning. Although normally the houses are cleaned out in early March every year, if the nest gets rented out to an undesirable tenant such as a house sparrow, opening a side door or the lifting off the top permits checking who the residents are before destroying the nest. If the house can only be cleaned out by removing the floor, the whole nest falls out before you can check the nationality of the residents. A couple of the houses that I built suffer from this flaw. The other is to design the entry hole to discourage wood peckers, IE, by adding an extra layer of wood around the door.

This year I mounted the bird houses on steel posts as you can see in the above picture.  It is easy to pound the posts into the ground anywhere you want and by using eight foot long posts the house will be about five feet off the ground. To discourage snakes and other critters from visiting the residents I put up a length of metal drain spout around the post to make climbing more difficult.

Oliver(holding the birdhouse in the following picture) came all the way from Germany to provide some of that well known German engineering expertise during the installation of one birdhouse. 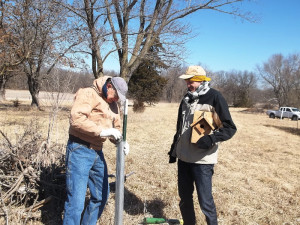 During January and February I cut down thorny locust trees on my property. If pastures are not mowed every year, one of the first volunteer trees to pop us is the thorny locust. these trees grow sharp thorns on the trunk and on the limbs – discouraging cattle and other mammals from getting close. Some fields in the nearby areas have not been maintained and the thorny locust trees are so thick that the branches mingle together and form a thicket that would be difficult for cattle or humans to enter. 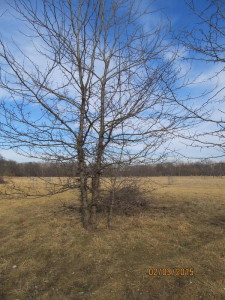 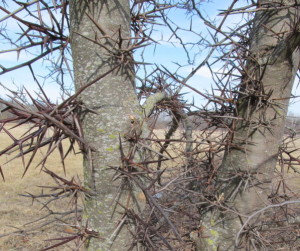 The first picture shows two trees before felling – I say two trees although it appears they may be growing from the same stump. As shown in second picture the thorns can be three or four inches long. I used hand tools (pruning saw, pruners, and axe) to work on the trees. To cut the trunk I first cut off a lot of the thorns and limbs to enable me to get close. This reduces the number of times I get poked later on. The thorns even puncture through the leather boots that I wear. Today when my skin is punctured the pain usually does not last long, although two years ago when I encountered the first thorn and lost, the wound ached for about four months. 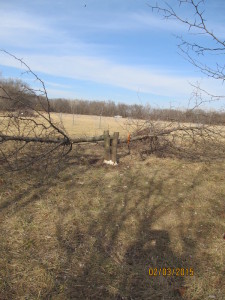 I cut the trees off about four feet above ground as shown in the picture above. Since I do not have a convenient way to get rid of the stump completely, I will be able to see the stump when I mow the field next summer. Judging from the rings on the stumps of the cut down trees, the oldest trees on my property are about ten years old as indicated in the picture below. Of course there are many smaller trees that are not so old. The oldest trees are 20 to 30 feet tall and the trunk diameter at four foot above ground is about nine inches. 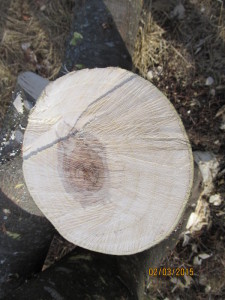 Because the thorns on the limbs have a way of locking together that prevents close packing, after cutting down the tree I cut the limbs off so they will settle down onto the brush pile as in the picture below. Going from previous experience the wood in the brush pile should be dry enough to burn in a few months – and, it will burn quite fast. 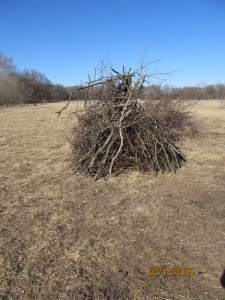 I have never tried to make mulch from thorny locust trees because the thorns remain very sharp after drying out and the needle points on many would probably remain whole even after going through a shredder. My father had many flat tires on his tractors due to thorns on his Illinois farm. Although there remain many thorny locust trees to be cut, I have cut down most of the larger ones. For now I am halting work on this task because many other more pressing tasks need to be attended to.