From late October into November I transplanted 60 pecan trees from three gallon pots into permanent field locations where I hope they will grow and produce pecan nuts. Although five trees replaced failed trees that were planted in previous years, 55 trees were planted into new locations. Due to the lack of rain from late August to the latter part of October, I delayed transplanting while hoping that rain would reduce the number of times I have to water the trees after transplanting.

The following picture shows a location after scraping away the vegetation but before digging the transplant hole. 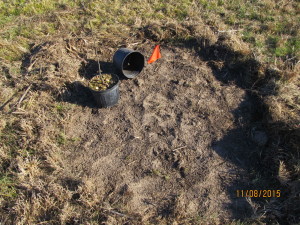 After digging the hole it appears as in this picture. 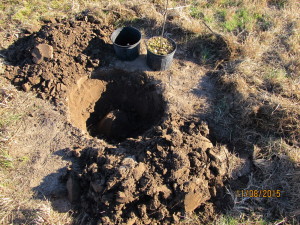 Note that the shape of the hole appears as if a donut was pressed down into it – the “donut hole” is a small mound of dirt in the center of the hole that was not disturbed during the digging process.  By resting the transplant tree on the undisturbed donut hole it should not sink any lower as it might if the dirt under the tree root ball was loose fill dirt. And, in the next picture the depth of the hole is checked by placing the potted tree on top of the donut hole. The tree should set down low enough that after transplanting the root ball will be covered with one or two inches of dirt. The potting media in the root ball is composed of very porous material, and, covering it with a layer of dirt will reduce evaporation that might dry out the root ball. 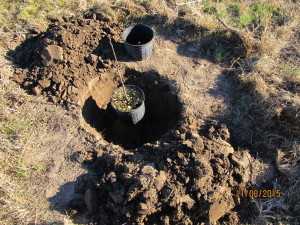 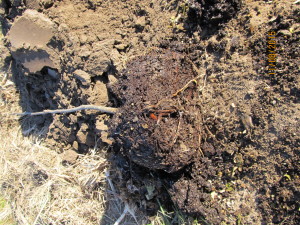 Large roots that encircle the root ball could cause problems as the tree roots grow in the ground, so, I cut them off as in the next picture. 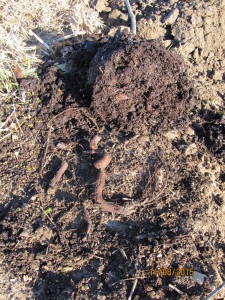 The trimmed root ball was then placed on top of the donut hole and the hole filled with dirt. A low ridge of dirt encircles the tree to provide a catchment for water as in the next picture. 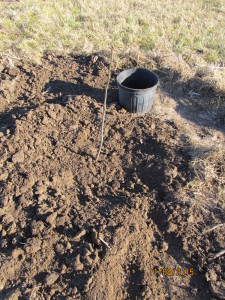 After removing the “t” from a t-post it is driven into the ground about 15 inches away from the tree on the north side. If the “t” is left on the post, the roots might grow over it and make it more difficult to remove the post in a few years when the post is no longer required. 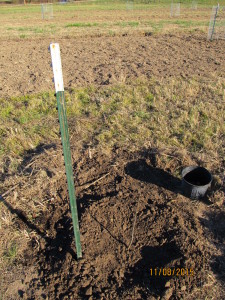 Next the tree is watered to settle the soil close around the roots and a fence ring is placed around it and fastened to the t-post. The fence ring is made of 2″x4″ welded wire and is four feet high and about ten feet long. Without a fence ring to protect the tree the deer often come up and sample the leaves and stem. Sometimes they will even try to pull the tree out of ground or tromp on it. With all the tracks they leave they seem to think it is their duty in inspect my work during the night after I finish.

In the last part of October there were two days when swarms of beetles filled the air around the steel building on my property. One day was after two days of rain and the other day was after a day of strong winds. There were many configurations of spots on their backs as the following picture shows. I wonder which are beneficial and which might be detrimental to the plants that I am trying to grow. 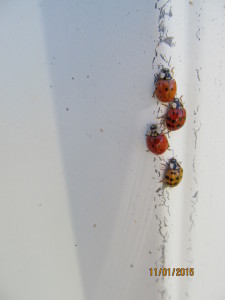 In the second picture they appear to be searching for an entry to the building and as a place to hole-up for the Winter. 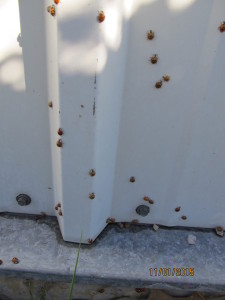 When one of the beetles is crushed, the aroma reminds me of the times when my mother was not happy  about how they invaded the ceiling light fixtures and were roasted.