In the two pictures below the brown areas are bare ground where I transplanted pecan trees from pots into the field during November. 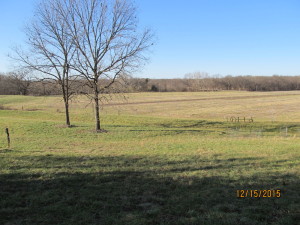 The following paragraphs list some of the work performed on the property in 2015.

Some common tasks performed on all young trees in the field included:

Work on the pecan trees included:

Currently there are about 250 young pecan trees in the field.

Currently there are 60 chestnut trees in the field.

Although all the trees were pruned in February, pruning is a continual process during the growing season. The purpose is to train the trees to grow limbs in a specific manner. A major problem that I have is that after I prune a tree, the tree often does not agree with my decisions. It then grows limbs in places that I do not want limbs to grow. Looking back I can sometimes see that the trees decision was better than mine. But, that is rather frustrating. Hopefully, more experience with pruning and tree growth will bring the decisions of the tree and my pruning decisions into better agreement.

Other tasks involved general maintenance of the property:

A. mowing all the grassy areas two or three times to control the serecia lespedeza and other weeds
B. cutting down thorny locust trees and autumn olive bushes
C. putting up bird houses for the bluebirds – made 3 new houses
D. putting up raptor perches for the hawks and owls to use when they are looking for mice – made 6 perches
E. painting the roof of the building
F. working on the fences
G. making storage carts that can roll around on the concrete floor of the garage – made 6 carts

This blog was also started as a record of activities.