With all the rain this year the trees, weeds, and other plants seemed to produce two years growth in one. The rainfall measured on my farm was 52+ inches whereas a more normal year would be about 40 inches. At the end of April there was a flash flood that washed out some trees that were planted in the creek bottoms.

My grafting success this year was about 60% with 16 successful grafts out of 25 attempts. One of the failures was because I did not get the new shoot tied up soon enough before a bird broke it off.

During October and November I planted 44 trees and bushes into the fields as follows:

Experimenting with cover crops continued. The cereal rye planted after Thanksgiving last year(2018) sprouted and appeared in mid-Feb. The stand was rather thin because it was drilled at a rate of only 50 lbs/acre. A seven way mix including barley, oats, etc was drilled about April 20, 2019. It rained a few inches in April after sowing and then rained ten inches in May. Water did not run off but stayed in the field which had a lot of thatch on the surface to trap it. As a result none of the seeds came up! Another seed mix was drilled in late July/early August with variable results. The mix did not compete very will with the yellow foxtail weeds but did OK in areas which had been mowed down before seeding. The triticale that was drilled without tillage into the rolled down Summer cover thatch on November 8, 2019, sprouted and was visible by December 10. The cereal rye that was drilled without tillage into mowed down fescue from November 15 to November 20, 2019, sprouted and was visible by December 20.

In the Spring there must have been thousands of paw paw blooms in the wild trees along the creek bank. But, in the Fall there were only a few fruit – I only ate two.

My plans to introduce some animals to the farm did not happen because I still need to install some perimeter fencing.

The paw paw trees are covered with blooms this year. Even trees with small diameter trunks have more blooms than they can possibly produce fruit. If only ten percent of the blooms produce fruit, there would be more fruit than in any of the previous seven years. The following pictures show the mass of purple blooms which are about one inch in diameter.

And, the first tick of Spring arrived on April 11, can Summer be far behind? 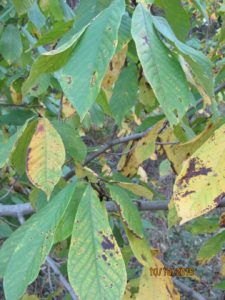 Here is a picture of one of the fruit. 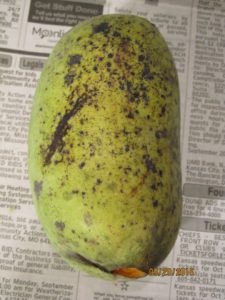 And, here is a picture of the same fruit cut open to reveal rows of seed in each half. I collected 12 seeds from this fruit. The edible part is the yellow pulp. 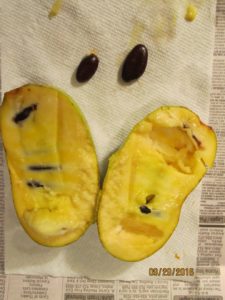 Here is a picture of the “paw-paw patch”. 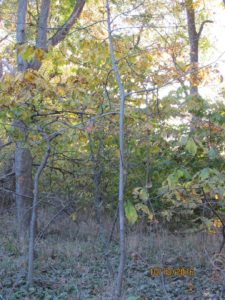