There are a few pecan trees on the farm that grew up before I got the property. Most of those trees do not appear to hold promise for nut production. But, one tree is somewhat isolated and near the creek. The pecans on it do not appear to have very much scab fungus which is the main problem with pecan trees in this area. So, I put up a stovepipe contraption around it to discourage squirrels from eating the nuts.

But, I only got to eat two nuts from the tree because the crows did the harvesting. The nuts are rather small diameter – the perfect size for the mouths of the crows.

Every year the deer try to destroy the fragrant sumac bushes by rubbing their antlers on them. But, the bushes revive in the Spring and the deer do their thing again in the Fall.

The following pictures show two bugs/caterpillars that were found on my pecan trees in July. This first bug/caterpillar has lots of fuzz.

The second bug has a lot of colors as you can see in the following pictures. Here is the top/back of the bug.

Here is the underside.

And, here is a side view.

In the middle of July I noticed a rather large bug – about 1.5 inches long. When I picked it up and turned it over it hardly responded. Poking its underside elicited a few kicks of its feet. Here is the view from above. 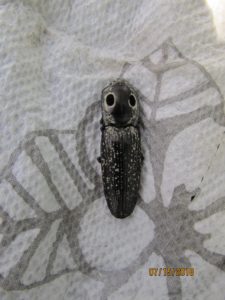 And, here is the underside. 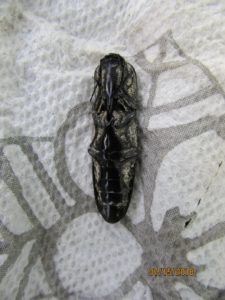 And, here is another bug that is about six inches long. 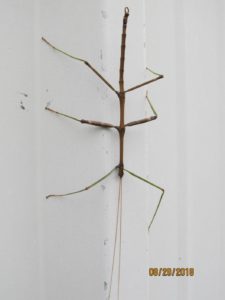 Back in June when the mullein plants popped up, most of the heads were affected by some kind of bug that chomped away on the head and some of the top leaves. Here are two photos. 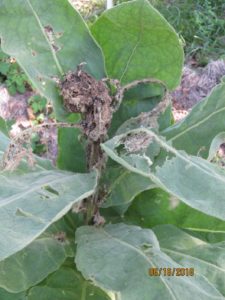 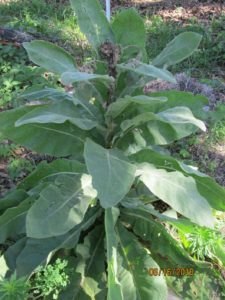 A more normal mullein head would be like the following. 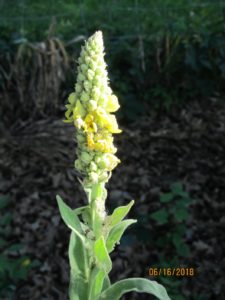 In September while harvesting chestnuts a few worms/caterpillars like the one in the following picture were sighted in the trees.  Without knowing what it is, I wonder what effect, if any, it might have on the chestnut trees and the burrs that contain the nuts. 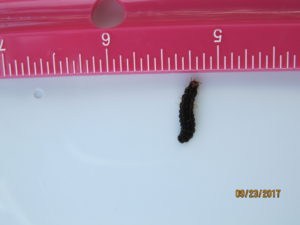 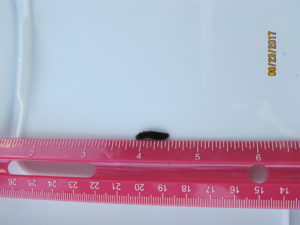 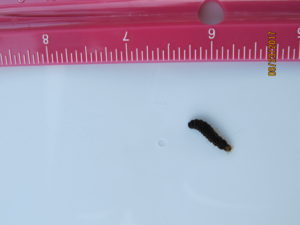 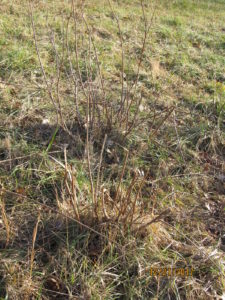 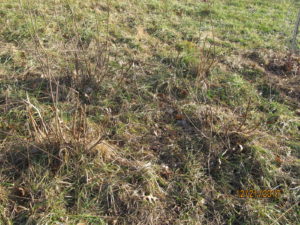 While sitting under an oak tree, the following critter dropped on me(inch scale). 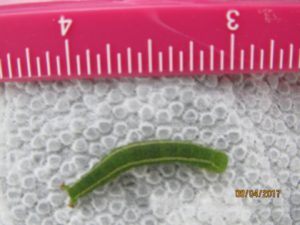 It apparently has 16 feet – 3 pair in front, 4 pair slightly behind the middle, and one pair on the tail end(centimeter scale). 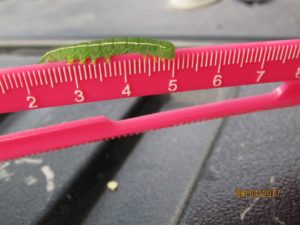 Whoa! What are these vermin feeding on the pecan tree leaves? 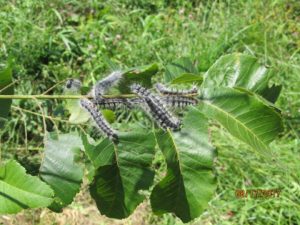 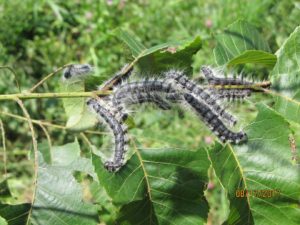 After removing hundreds of caterpillars that were feeding on the tree leaves by crushing them between my fingers, here is what little foliage remained. 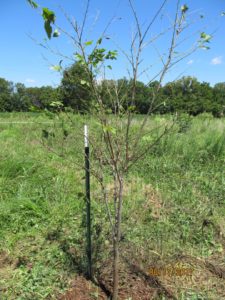 The caterpillars had almost completely defoliated the tree before I noticed it. So far this is the only affected tree that I have found. And, here is a closer look at what the caterpillars leave behind after feeding. 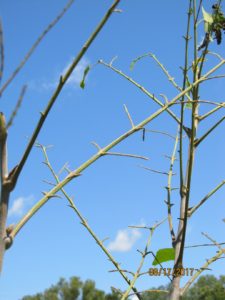 There are lots of birds that feed on the insects in the trees and leave their poop on the leaves and protective fence that encircles each tree. Sometimes they even land on the limbs and break some off. So, why did the birds not find and feed on the hundreds of caterpillars that were on this tree?

The June beetles (June bugs) arrived in late April this year. During the daytime they burrow down under ground and then come out at night to eat my pecan trees. As you can see in the following two pictures they tend to attack the top shoots of the pecan trees. 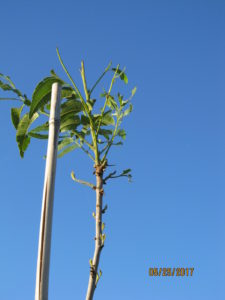 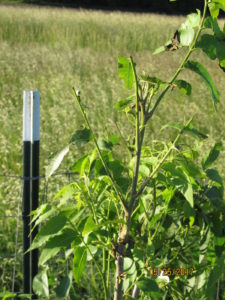 Last Fall after transplanting pecan trees from pots into the field, I sowed cereal rye around the trees. The following picture shows the rye at about five feet high and towering over the four foot high fence ring that surrounds the small tree. Those trees were not affected by the June beetles. I guess the beetles look for tall trees/plants to attack. 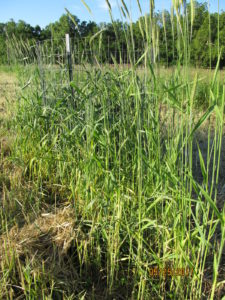 In May, 2015, the beetles did major damage to many of the young pecan trees that I had planted the previous Fall – they completely defoliated some of the small trees. Those trees did survive and grew back leaves but their growth has been slow.  Trying to prune the affected trees to a central leader in 2015 was practically impossible.   But, in 2016, there was very minor damage by the June bugs. This year they are back and attacking pecan trees. This on year/off year cycle fits the pattern noted by some writers.  One interesting item to note is that in May, 2016, that same field had thousands of fire flies at night and there were some dead beetle shells seen in the daytime.  The weather has been cooler this year and when the temperature is 50 degrees or below the fire files  do not fly around at night.

One method I am considering to combat the beetles involves useing ducks and lights. By placing a light out in the field at night with a pool of water under it and some ducks near by, the beetles might come to the light and fall down into the water to make soup for the ducks. But, it would be necessary to prevent the owls and critters from crashing the party. Although chickens go to bed a sundown, ducks can party all night long.